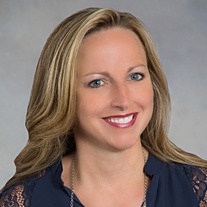 Finance Manger
Kim Lancaster has been with C.A. Short Company for over 17 years & is our Director of Client Experience. She continually focuses on delighting our clients, embracing change & encouraging growth within the organization. Kim graduated from Appalachian State University with a BS in Management & loves being challenged with new opportunities...READ MORE

How Do You Foster Dignity and Respect at Work? 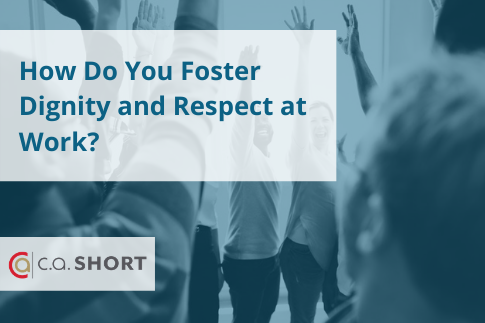 Creating a work environment that fosters a culture of positivity can often-times be quite challenging. To create a positive culture, the leaders of your organization must not only promote this behavior, they must also understand its importance. Employees who feel they are treated with respect and dignity are more engaged and productive than those who don’t. Let’s take a look at a case study where a hospital was able to improve its workplace culture and patient experience. 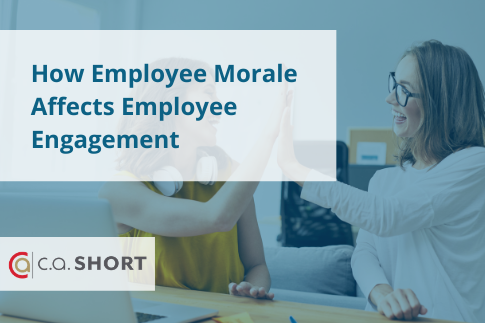 Employers have long described employee morale as the attitude, emotional connection, and satisfaction of employees while they're on the job. However, organizational leaders and management often monitored morale solely based on employee retention and productivity.

The Impact of Appreciation: Showing Employees You Care 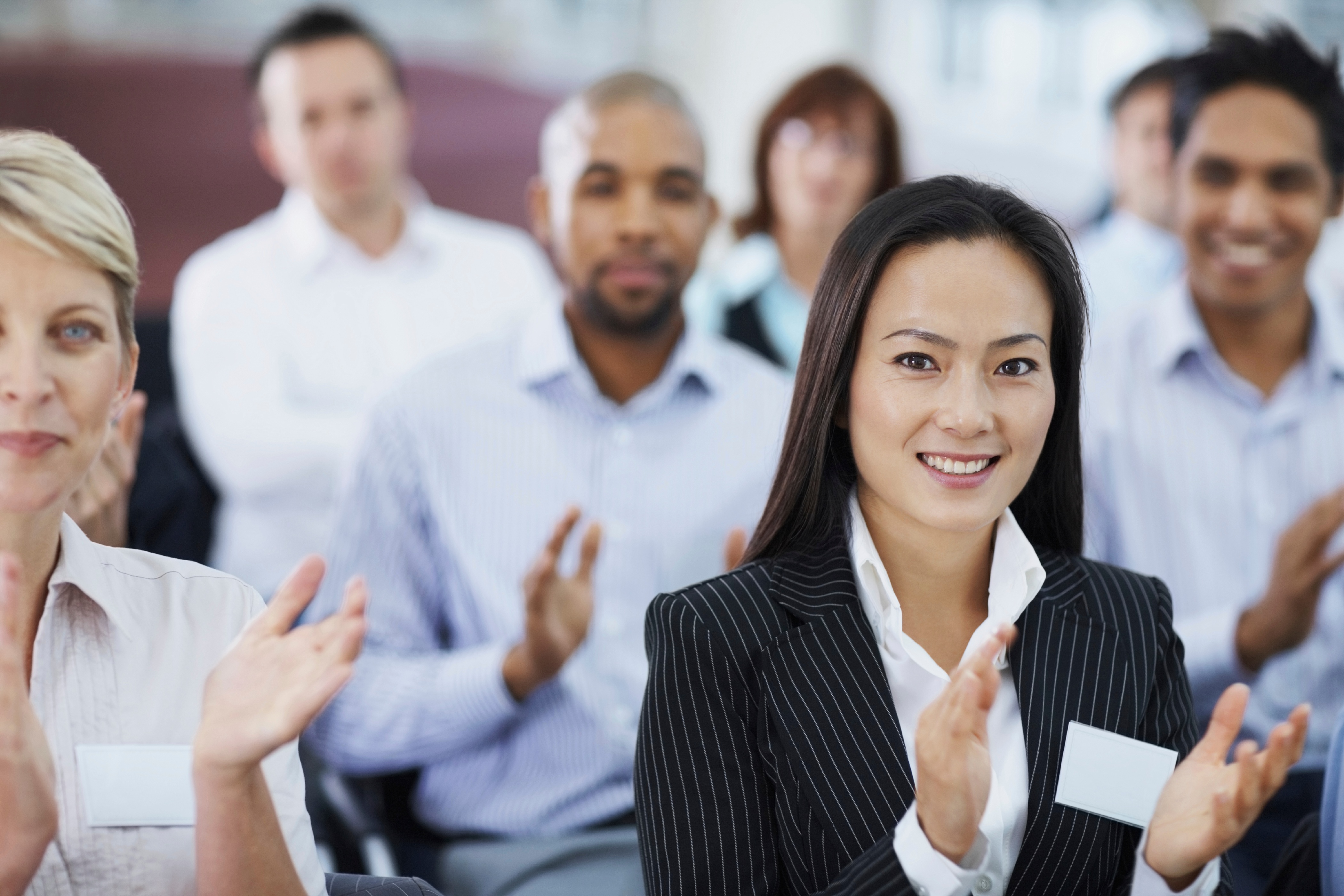 Have you ever worked for a company that seemed to maintain a staggering turnover rate? Well, you're not alone. This is a problem that many businesses face.

When employees first join an organization, they are motivated, engaged and ready to face any and all opportunities head-on. Sadly, it is often the case that these same eager employees end up watching the clock and lose interest in making a difference.

5 Ways to Engage Employees through a Client Experience Strategy 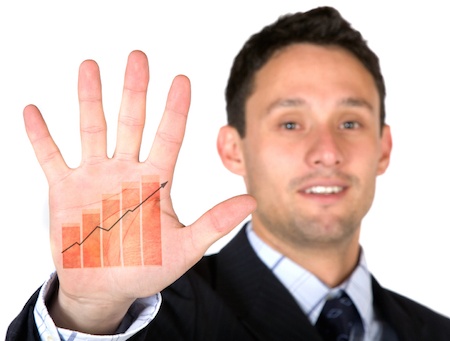 It’s no secret that providing exceptional client service is a core piece of organizational success for any company, but is it enough to retain clients and assist in generating new business? Do you find yourself wondering how your organization can stand out above the rest and be successful for years to come? That’s where creating a concrete client experience strategy, fueled by employee engagement, comes in handy. 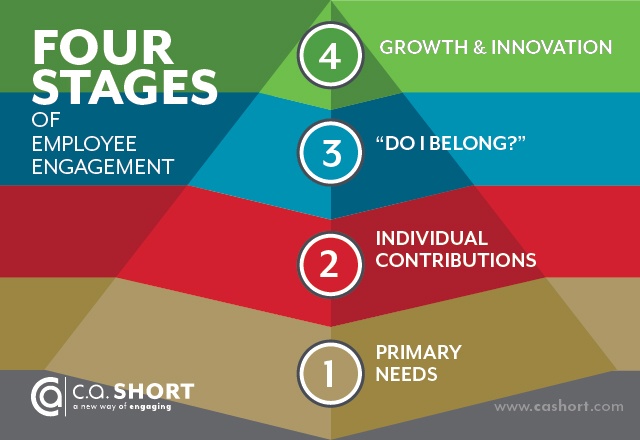 In our previous blog, we took a more in-depth look at Gallup’s revolutionary Q12 Survey and how its intentional—and labor intensive—design has lead to new and powerful insights regarding employee engagement. As part of the discussion, we also briefly mentioned how the order of the items deliberately ties into the Four Stages of Employee Engagement. This hierarchy represents the path any employee travels on their way to total engagement in the workplace. So, to further iterate just how important all of these stages are and why focus must be given to each one individually, let’s look deeper into what they represent for the employee.

How to Create a Successful Service Award Program

Last week, C.A. Short Company hosted our annual service award program at our Shelby, North Carolina facility. It is always a great time to celebrate the hard work and dedication that our employees exhibit year after year. This is an exciting time for C.A. Short Company - we have recently launched our People Are Everything employee engagement platform, our PeopleAre™ mobile application, and we are continuing to grow our team and our product lines. With all the change and improvements to our company, the theme of this years’ service award banquet was, “Race to the Chase: Welcome to the New Age.”

Employee Recognition During the Holidays: Old vs New Strategies 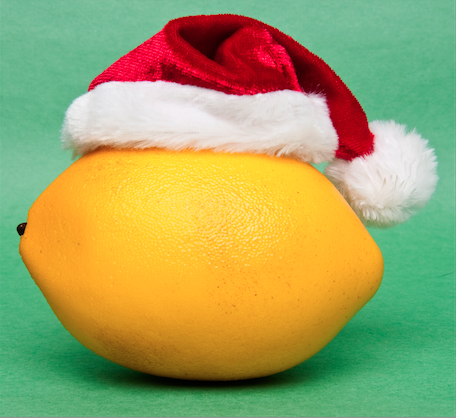 The Way It Once Was

Employee recognition during the holidays has certainly changed in the last several years.

My first job out of college was as an Assistant Buyer at a retail company. I worked on a retail floor throughout college, so I was unaware that companies held holiday parties for corporate staff. That year I followed my supervisor to the gathering. The party was very formal - we were provided lunch, received tickets for a chance to win prizes, and the president of the company spoke about the state of the company. With the speech done, it was time to announce the winning tickets. The mystery gifts? Big screen TVs!  Winner after winner was called, as the rest of us watched on. The president enjoyed giving gifts to his employees and playfully asked his assistant how many more gifts he could give out.

When the gifts were all given, the party was over. We were sent home with a paid, half day off. I walked away from my first ever employee appreciation holiday event empty handed. At the age of 23, I was pretty excited to have a half day off. I mean that is big time, right? I was given no TV and no appreciation. That was 1999.