In our previous blog, we took a more in-depth look at Gallup’s revolutionary Q12 Survey and how its intentional—and labor intensive—design has lead to new and powerful insights regarding employee engagement. As part of the discussion, we also briefly mentioned how the order of the items deliberately ties into the Four Stages of Employee Engagement. This hierarchy represents the path any employee travels on their way to total engagement in the workplace. So, to further iterate just how important all of these stages are and why focus must be given to each one individually, let’s look deeper into what they represent for the employee.

What Is Employee Engagement?

As a reminder, employee engagement is defined as the emotional commitment the employee has to an organization and its goals.

This means, engaged employees actually care about their work and their company. They're not working just for a paycheck or their next promotion.

Regardless of the position you’ve been hired to fill, every first day on the job holds a few basic questions; the most important of which is, “What do I get from this role?” While a very broad and generalizing inquiry, its answers are extremely important to how your position is perceived; how you’re valued by the team and the organization; and what you can personally gain from successfully embracing your responsibilities. Most conclusions are drawn on the first day or at the very least, within the first week. They come from your interactions with other team members; the responsibilities that are placed within your reach; and how leadership speaks to you in regard to current and future goals of the organization. Every employee wants to feel that his or her position matters and an employee’s primary needs aim to address that goal.

Are you completely satisfied with the effort you put in at the office? Is there anything you would change about your current role? Are your unique skills being utilized to their highest degree? Do others recognize your efforts or do you get lost in the shuffle? Stage 2 tends to raise a lot of questions surrounding one’s individual worth and desire for praise, feedback and acknowledgment. On one hand, if you don’t feel you’re putting in enough effort, you have to wonder if it’s because you aren’t happy in your current role or if the organization isn’t giving you enough in the fulfillment department. However, if you do feel as if you’re putting in the right amount of effort or even going above and beyond what is expected of you, the question becomes whether or not your company is acknowledging your contributions and/or giving you the performance feedback you desire. Both sides are important to feeling engaged by your company.

Stage 3: A Sense of Belonging

After an employee passes through the first two stages in the hierarchy, their focus begins to turn outward; from the position they hold to the company they keep. This is the point in time when one begins to wonder if they enjoy their environment and are happy with the relationships and connections they have with co-workers. Because as important as your role is within an organization, it’s just as important to feel like you belong amongst the team; have individuals you can confide in on the job; and know the work you’re doing as a collective is of the highest caliber. This distinction in atmosphere can be a defining factor when trying to decide how invested you are in the company and those around you—which can ultimately play a role in your overall work efforts and earnings per share.

The most advanced stage of the hierarchy, Stage 4 focuses on longevity. Does your organization offer the tools you need to not only succeed in your role, but also grow within it and/or climb the ladder? Is there a system in place that allows you to express your ideas and put them into action? Feeling stagnant in your role can often lead to a slow decline in your willingness to deliver on every level, as there’s a gap between personal motivation and actual possibilities, as defined by the company you work for. If someone is truly invested in their role, innovation, growth and improvement will ultimately become a focus, as engaged employees want to grow with the company, rather than sit back and watch it happen without them.

As you can see, each of the four stages has a clearly defined focus as it relates to a worker’s desire to feel embraced and engaged by the organization for which they work. So, once you acknowledge these important areas, it’s easy to look at Gallup's Q12 and draw intuitive insights as to the order of the questioning, their selected wording and the content of the inquiries themselves. Total engagement may not always be cut and dry, but the process to achieving it is fairly clear once you take a closer look.

To learn more about Gallup’s Q12 survey, read our previous blog titled, Getting In-depth with the Gallup Q12 . 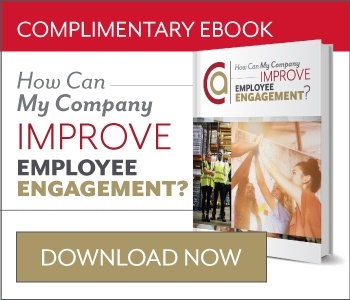 Editor's Note: This blog post was originally published in 2016 and has been recently updated. 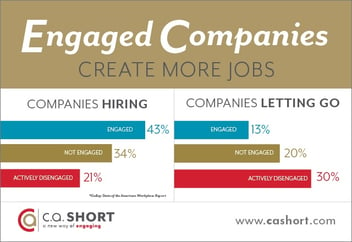 At the conclusion of our last great recession, economists widely agreed the U.S. needed to create...

The importance of keeping your employees emotionally engaged in your organization is a constant...

Studies have shown repeatedly that an atmosphere of encouragement and appreciation has a huge...